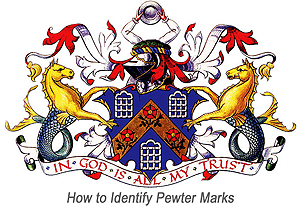 Pewter hallmarking began in 1530, when a law was passed in Britain that each pewterer should have an individual pewter hallmark or touch mark to identify his work.

A record of these antique hallmarks were copied onto touch plates and stored at the Pewterers hall in Oat Street London.

This was the home to the Pewterers Guild (the Worshipful Company of Pewterers London) established in 1348 and still going strong today.

Early pewter hallmarks or touch marks were very simple at first, often just initials or simple devices, but these became more elaborate over the years, as manufacturers added more flourishes to their work.

For example one maker called George Bacon (1745 -1771) used a pig in a circle with the words “George” curving above and “Bacon” below with a rectangular label reading “IN THE STRAND/ LONDON” cast in two lines.

Many early pewter hallmarks include small makers marks contained in a shield and words such as “superfine metal.” Sometimes the maker’s name is written in full.

As well as the maker’s mark, the crowned rose symbol is a common antique hallmark of the time.

At first, this pewter hallmark was reserved for use solely for London Guild members but by 1671, was changed to be used exclusively as an export mark.

This did not work because by the end of the 17th century, the crowned rose was being copied by the majority of London pewterers and many of the provincial makers just to give their pewter a look of quality.

Unfortunately, most records of the first antique hallmarks (up to 1666) were destroyed by the great fire of London that engulfed the Pewterers hall.

Once the hall was rebuilt, the guild set about recording these marks again and accumulated over a thousand pewter hallmarks over the years that followed.

(the Worshipful Company of Pewterers London) established in 1348 and still going strong today.

In 1970, the pewter manufacturers formed the Association of British Pewter Craftsmen –with the approval of the Worshipful Company of Pewterers London.

The ABPC established a new pewter hallmark first used in 1971, as a quality mark. This is a circular mark, which contains a large letter A within which are contained the letters BPC. (see image)

This Pewter hallmark guarantees that the piece conforms to good quality standards.

It must contain 90% tin, the balance being copper, antimony or bismuth. The must be less that 0.5% lead and less than 0.1% trace elements.

You may also see the Seahorse mark – denoting ABPC members’ finest work and the EPU mark of the European Pewter Union. (see image)

Any piece of pewter bearing any of these antique pewter hallmarks must also be marked with the individual maker’s mark.

Modern pewter is collectable and the modern manufacturers carry on the tradition of touch marks as well as following in a long and established British tradition.

Whether you are interested in the arts and crafts movement or early periods, antique pewter has never been more popular.

Knowledge of Antique pewter hallmarks or pewter touches helps you date and set a value on any piece.

In addition, today’s modern pewter looks set to become the collectables of the future so appeals to modern buyers as well.

Do you have a Silver hallmarks guide?

Hallmarks are the key to valuing silver and gold and if you have ever struggled to identify a hallmark – and let’s face it even experts cannot remember all of them, then you need portable expert information at your fingertips.

Understanding Gold and Silver Hallmarks is a complete guide to British hallmarks and assay marks that can be downloaded straight to your computer, i phone and mobile device for only £2.99.

This e book includes all marks from 1678 right up until the present day and also contains a section on international marks.

It is available in PDF format making it suitable for both computer, i phone, i pod touch and almost any mobile device that will read these industry wide standard formats.

No need to learn or memorise the hallmarks, just keep the guide handy and check the details before you buy or sell.