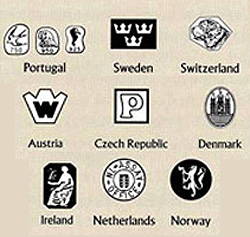 The big problem with buying foreign silver is that even if there is a hallmark system, you are unlikely to be familiar with it.

Despite this, it is a mistake to discount all foreign silver just because of your lack of knowledge, because in many cases foreign silver can have a very high silver content as well as holding great artistic or antique value.

You do not have to be an expert in all foreign hallmarks to be able to identify the country of origin. Most foreign hallmarks give you plenty of clues plus some vital silver information will help you sort the quality silver from the white metal.

So here is a quick guide to the foreign hallmarks you can expect to find on silver from abroad.

US Silver
The USA does not have a national assaying office and consequently there is no national dating system.
However, from around 1870 all silver is marked with a maker’s mark and usually a standard mark such as “sterling” or “sterl” 925 or similar.
The maker’s mark can be in the form of lettering or a small symbol. There are hundreds of American silver maker’s marks so this is a specialised field.

Irish Silver
Irish silver comes under British hallmarking system, despite Irish independence follows the same system today, and has an assay office in Dublin.
From 1637 the silver 935 standard quality is depicted by a hallmark showing a crowned harp.

Mexican Silver
Mexican silver has marks, which date back to the 1920s, but as with the USA, there is no standardised assay office.
Instead, Mexican silver is marked by the manufacturer and in many cases, the silver purity is included.
Very often, this exceeds the 925 standard silver content and you may see 980 silver and 940 silver for example.

German Silver
German marks are easy to read. Pre 1836 German and Prussian silver is marked with a city mark to denote the place of manufacture.
Then in 1884 a law was passed making 800 the minimum standard for German silver and more changes occurred in 1886 when the city mark was abolished and replaced by a national symbol (Reich mark) – signified by a crescent moon and crown.

Austrian Silver
Because of the many political changes to Austria - Hungary, the hallmarks are complex. Pre 1866, most hallmarks show a purity level and a symbol showing the town of manufacture – Vienna for example is marked by an “A”.

1866 – 1922 the years of the Austro Hungarian Empire, you will find a hallmark depicting a woman’s head (Diana) and small marks to denote purity i.e. a dog’s head for 800 silver and a lion’s head for silver purity of .700. There will also be a letter to denote region of manufacture.

From 1922 onwards, Austrian marks feature a hoopoe bird or toucan, the silver content written as a number such as 935 and a letter for the town of manufacture.
Understanding foreign silver is a great way to make money because it enables you to be confident about antique and contemporary silverware when other collectors may be put off.

Most people do not understand foreign hallmarks or silver markings, so in many cases, you can buy good quality foreign silver for extremely low prices.
Look out for the next article to find a guide to foreign silver part 2 of this article to where foreign silver is originally from.